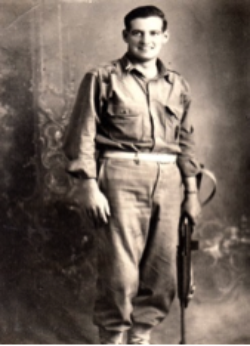 Captain Frederick Harrison Dillon was born 23 February 1918 in Utica, New York. After several years employed with Savage Arms of Utica, New York,  he enlisted in the Army in February 1941. He was subsequently assigned to Raritan Arsenal, New Jersey upon completing basic training that same year. In 1942, he was assigned to the Bomb Disposal School at Aberdeen Proving Grounds, Maryland.  Upon commissioning and graduating, he was offered a position as an instructor at the school. Captain Dillon declined, instead opting for combat service and was assigned as Commander of the 235th Ordnance Bomb Disposal Company (Provisional), Aberdeen Proving Grounds, Maryland.

In April 1943, Captain Dillon deployed with 235th Ordnance Bomb Disposal Company (Provisional) to Oran, Algeria where the unit was assigned to the North African and Italian theater.  Captain Dillon was part of the 1943 invasion force of Sicily, Italy basing operations out of Palermo, Sicily. In October 1943, Captain Dillon and the Commander of Third Platoon, First Lieutenant Steve Todorovich, received temporary duty orders to North Africa where they were to travel to Tunis, Tunisia from Maison Blanche Airport, Algiers, Algeria. At 1420 on 10 October 1943, the officers departed Algiers on board a B-25C “ferry” plane (tail number 42-64510 from the 379th Bomber Squadron, 310th Bombardment Group) on heading 090° toward Tunisia. Missing Air Crew Report (MACR) 1102, dated 27 October 1943, confirmed the plane never arrived. The circumstances of its disappearance were not known. Investigations by the Army Air Force indicated no wreckage or human remains had been recovered. Captain Frederick Harrison Dillon was listed as missing-in-action, non-battle casualty on the day of the mission.