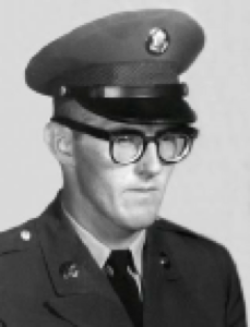 Captain Frederick Phillip Smith was born on 5 March 1946 in Oklahoma City, Oklahoma. He enlisted in the Army in June of 1965 and commissioned as an officer in April of 1967.

He graduated from Basic combat training in September of 1965. He then served at Selfridge Air Force Base in Michigan from September 1965 to September 1966. He transferred to Fort Benning for officer training. Upon completion of Officer Candidate School, he was assigned to a Tech Escort unit at Edgewood Arsenal in Maryland. He then attended Naval School Explosive Ordnance Disposal in April of 1968. Upon graduation, he transferred to Escort and Disposal Detachment, Rocky Mountain Arsenal Colorado.

On 13 February 1971, CPT Smith was conducting a “People Sniffer” mission over Binh Tuy Province, III Corps (present-day Binh Thuan Province) in a valley suspected to be occupied by enemy troops. The mission’s objective was to make one or two runs at 1,500 feet (optimum altitude for maximum effect) down the valley dropping approximately 20 modified Air Force BLU E158 tactical CS-2 (2-chlorobenzalmalononitrile) clusters bombs from the Huey helicopter.   CS is a chemical agent in the family of riot control agents, commonly called “tear gas.”  Each E158 cluster bomb consisted of 264 D-cell battery-sized canisters of CS held in place by a plastic unit that measures 3-foot-long and 1-foot-wide.  A timing fuse detonates a bursting/igniting charge that sends the smaller munitions over a 50-meter area, spraying CS as they scatter. During the flight, one of the BLU E158 released its payload and filled the helicopter with CS gas. While this was going on, CPT Smith, although badly burned and with his clothing on fire from the black powder bursting charges, realized that everyone’s lives were endanger and he was able to undo his seatbelt and push all of the clusters out of the helicopter. In the confusion, blinded and choking by the CS smoke, he may have been thrown out during the autorotation or by the explosion of the charges. CPT Smith went out with the clusters munitions and fell 1,500 feet to his death. Captain Smith’s body was recovered three days later.