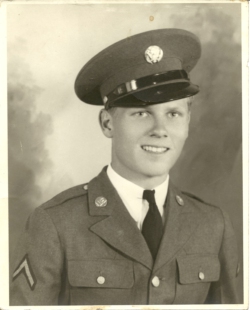 Note:  Copied from page 101 of Combat Loaded: Across the Pacific on the USS Tate:
“Ernie Pyle did not have to wait long for a good look at what Ie Shima had to offer.  Approximately 300 yards from Gen (BG Edwin Hubert) Randle’s command post, a huge explosion occurred where a bomb disposal squad was loading a truck with Japanese bombs that had been excavated from the road.  All but one of the squad’s men was killed.  When Randle returned to his command post after investigating the blast, Ernie Pyle was off exploring a cave.” Ernie Pyle was killed later in the day.

*This bio was researched and authored by SGM Mike R. Vining, USA (Retired) with supporting research from the books, Nine from Aberdeen, by Jeffrey M. Leatherwood, Ph.D., and Bomb Disposal, The Early Years of Explosive Ordnance Disposal, 1940 to 1949, by LTC Robert E. Leiendecker, USA (Retired)