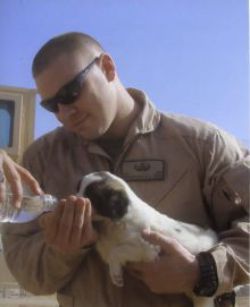 Chief Warrant Officer 2 Ricky L. Richardson, 33, of Franklin, Mo., died while supporting combat operations in the Farah province, according to a news release.

Richardson arrived on Okinawa in July 2007 and was assigned to the 9th Engineer Support Battalion, 3rd Marine Logistics Group, III Marine Expeditionary Force. He deployed to Afghanistan in February for his sixth combat tour, the release said.

Family member Theresa Hulsey of Sullivan, Mo., told St. Louis television station KSDK that Richardson was a passionate and dedicated Marine. “Even when he wasn’t on tour, when he was home, he was always saying, ‘I need to get back over there. There’s a lot I could be doing,’ ” Hulsey said, according to a report on the station’s Web site.

Family also told the station that Richardson is survived by a wife and an 8-year-old son.

Richardson joined the Marine Corps in 1996. He was promoted to chief warrant officer 2 in August.