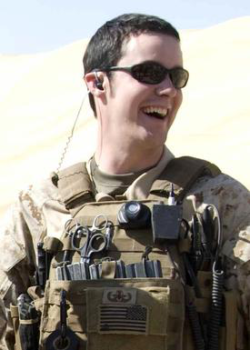 Explosive Ordnance Disposal Technician Second Class Petty Officer (EWS) Tyler John Trahan, U.S. Navy was born on May 2, 1986. Tyler was born in New Bedford and lived on Long Pond in East Freetown, Massachusetts all his life until he began his career in the Navy.

EOD2 (EWS) Trahan attended Old Colony Regional Technical Vocational High School where he quarterbacked the football team, was inducted into the National Honor Society (NHS), and graduated at the top of his class. Tyler’s NHS sponsor recalls that if anyone ever needed something done they could count on him to see it through, however difficult. Tyler particularly excelled in carpentry, and throughout his life was fond of construction projects that could benefit his friends and neighbors. Following high school graduation, he attended Massachusetts Maritime Academy for a year then enlisted in the U.S. Navy on May 16, 2006.

Serving as his boot camp class leader, Petty Officer Trahan graduated and was given the rare offer for an enlisted man to attend the U.S. Naval Academy and become an officer. Tyler declined the offer, choosing instead to embark on the challenging training required to become an Explosive Ordnance Disposal technician.

EOD2 (EWS) Trahan reported to the Naval Diving and Salvage Training Center (NDSTC) Panama City, Florida as a student under instruction in September 2006. Upon graduation Tyler was awarded
Most Valuable Junior Sailor for the class of 06-80-EOD. Petty Officer Trahan’s work ethic and sense of humor brought him distinction at his next training assignment at the Naval School for Explosive Ordnance Disposal (NAVSCOLEOD) at Eglin AFB, Florida. As a parting gift, Tyler organized the construction of the pull-up bars that still stand at the EOD School’s Underwater Division used every day by EOD student and instructors alike.

A newly-frocked Petty Officer, he attended Basic Airborne School at Fort Benning, Georgia in October 2007 after graduation from EOD School then reported to Explosive Ordnance Disposal Mobile Unit TWELVE in Norfolk, Virginia in December 2007. Petty Officer Trahan’s performance earned him a challenging initial assignment on a Naval Special Warfare (NSW) platoon and began an eighteen month training cycle in preparation for a deployment in support of Operation IRAQI FREEDOM. In the face of any challenge, Tyler’s shipmates recall him as a young man whose natural leadership and buoyant spirit brought them through tough times with humor and resolve.