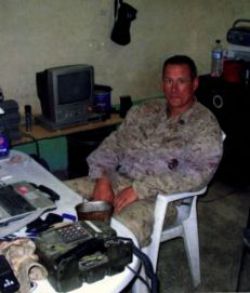 Father and son together once more
BY SUZANNE ULBRICH
Courtesy of the Jacksonville Daily News
December 3, 2007 J

Father and son, Roy Boatman and Darrell Boatman, will be inurned side by side with full military honors in the presence of their family and many close friends in Arlington National Cemetery’s columbarium.

The Boatmans and Darrell’s wife, Michelle, brought Darrell Boatman home to Onslow County from Germany and held a private viewing and memorial for him.

The next day, a memorial service with full honors was held for him at Camp Lejeune. His father was moved by the ceremony but was still unsettled because he wanted his son buried in Arlington National Cemetery.

“Darrell’s wife, Michelle, wasn’t ready to part with Darrell’s ashes,” Joyce said, “and Roy respected that and wanted to support her, so he decided not to push her.”

Nine months later, retired Army Master Sergeant Roy Boatman, 62, died of a massive heart attack on the way home from a P/75 unit reunion in North Carolina with his wife.

He received a memorical service with full honors, and Joyce Boatman kept his ashes. But she always wanted to make her husband’s dream come true.

“The last thing I can do for (Roy) is to see that his wish was fulfilled,” Joyce Boatman said. “Michelle said she was ready, so I asked a good friend and Roy’s former commander in Vietnam, John Lawton, to help me. He arranged for them to be buried in Arlington’s columbarium.”

Lawton said he remembered Roy Boatman’s expressing his wish that father and son’s final resting place would be in Arlington National Cemetery.

“He had expressed a real desire to have Darrell and eventually himself inurned in Arlington when Darrell died.” Lawton said. “I knew when the time came, I would do everything I could to make that happen. I loved the guy. He was quite a soldier and quite a character.”

Lawton said Roy Boatman was a “highly trained Ranger, highly respected, who impacted all of us greatly.”

Lawton remembered how Roy Boatman lost his foot on his fourth tour in Vietnam going into a mine field to save another soldier who was injured – something he said they were taught never to do.

Roy Boatman had to fight to stay in the Army, passing a physical training test with a prosthetic foot and becoming one of only two amputees to remain on active duty at the time.

He injured the other leg so severely testing a new square parachute, his sister Elaine Westmorland said, he should have had it amputated, but he refused because he didn’t want to be in a wheelchair. That injury forced him to retire from military service and left him in constant pain.

His son followed his father into service.

Darrell Boatman was a 20-year veteran of the Marine Corps.

While serving in Al Anbar Province on his third tour in Iraq with the II Marine Expeditionary Force Explosive Ordnance Division, he was hit by a command-detonated mine and received a piece of shrapnel to the left side of his head, which proved fatal.

The town of North Topsail Beach renamed Marine Drive to GySgt D.W. Boatman Drive and holds an annual memorial ceremony around Veterans Day at the site.

At this year’s service, retired Gunnery Sergeant Jason Wagner, who served with Darrell Boatman, spoke about his long-term friend and brother in arms. “

He mentioned how he always speaks, when remembering something he and Darrell did together, in the present tense.