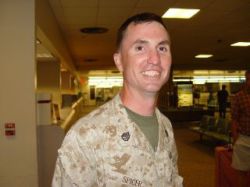 He proudly and honorably served his country in the U.S. Marine Corps as an explosive ordnance disposal technician. He had joined the Marines in 1994, upon graduation from high school in Ohio.

He was stationed for a number of years at Indian Head, Md., with CBIRF and continued his service with the Second EOD Company aboard Camp Lejune, N.C.

In addition to his loving parents and devoted wife, he is survived by his beloved daughter, Abigail; his soon-to-be-born son, Chance; and his mother-in-law, Linda Armstrong, who resides with the family. He also leaves behind his three brothers; one sister; and numerous nieces, nephews, aunts and uncles, most of whom reside in Ohio.