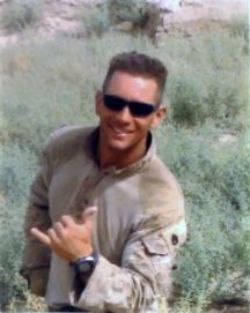 On 29 August 2010 at approx 4.50 PM GySgt. Floyd Holley was killed in action while prosecuting an IED in the RC (SW) AO.  GySgt. Holley was as solid of a man and EOD Tech as they come, always there when someone needed something with a grin on his  face and not a hair out of place.

GySgt Floyd Holley was born in Winter park, Fl on August 16th, 1974. He graduated Lyman High School in 1993. He then spent a year in Missouri at Central Methodist College running track and playing football. GySgt Holley enlisted in the Marine Corps and attended recruit training at Paris Island, SC in November of 1997. Upon graduation, PFC Holley reported to Marine Combat Training at Camp Geiger, NC. Upon completion, he was sent to Camp Lejuene, NC for Basic Electrician’s course. After graduation he was assigned to 1st Radio Bn at Marine Corps Base Hawaii.

During his tour there he was deployed to Kuwait in support of 1st intelligence Bn and also went with Joint Task Force Full Accounting to Vietnam. Sgt Holley Reenlisted and was accepted into the Explosive Ordnance Disposal (EOD) program in May 2001 and departed for Naval Explosive Ordnance Disposal School at Eglin Air Force Base, Florida August 2001. After graduating EOD School in May 2002 Sgt Holley received orders to MWSS 374, 29 Palms Ca. While stationed with 374, Sgt Holley Augmented 1st EOD company on the 13th MEU in 2003. During this deployment he was involved with operations in Iraq, Kenya, and Djibouti Africa.

SSgt Holley then received orders to EOD Base team at Marine Corps Base Hawaii. During his tour in Hawaii SSgt Holley went to Vietnam in support of Joint Prisoners of War, Missing in Action Accounting Command (JPAC). After three years in Hawaii SSgt Holley was then sent to 1st EOD Company, MCB Camp Pendleton, Ca. During this tour he was deployed to Operation Iraqi Freedom from Aug 08 to March 09. He was promoted to his current rank during this deployment on 1 Dec 2008. GySgt Holley deployed in support of Operation Enduring Freedom in March of 2010.

GySgt Holley is survived by his wife Christen, son Andrew and daughter Alyssa.