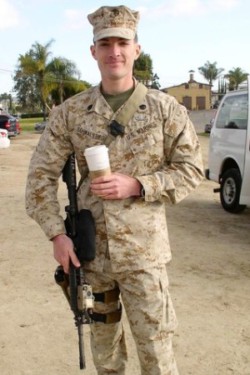 Staff Sgt. Justin Schmalstieg was a Marine working as a bomb tech in Afghanistan. He completed his mission on December 15, 2010 when a roadside bomb he was working to diffuse went off. The Department of Defense has not yet released information about where and how Sgt. Schmalstieg died.

Justin’s bravery and cool ability to face danger was inherent in his DNA. Both of his parents are detectives with the Pittsburgh Police Bureau.

Schmalstieg grew up in Stanton Heights and married his high school sweetheart last year and moved to Oceanside, CA outside San Diego. His body will be brought back to the United States next week.

Sgt. Schmalstieg, a 2000 graduate of Peabody High School, served with the First Marine Logistics Group and was an expert at disarming explosives.

He had served three tours in Iraq and was finishing his first tour of Afghanistan, according to his former neighbors in Stanton Heights.

Funeral arrangements have not yet been announced but Pittsburgh police officers are working with Schmalstieg’s parents to plan a special tribute.

In April, Justin was included in a story in The Convoy, the official publication of the First Marine Logistics Group, which ran an image of him working on a buried bomb during a March training exercise at Deluz Combat Town at Camp Pendleton, Calif.

However, it was a real roadside bomb that took his life in Afghanistan and Schmalstieg was using that training as a bomb technici

Renee Drummond-Brown, whose son, Specialist Cardell Nino Brown, was close friends with Mr. Schmalstieg, described him as “a very brilliant mind.” She said Mr. Schmalstieg spent so much time at her house as a child that she considered him a son.

Even as a child he was unusually quiet and calm, she said, traits that would have served him well as a bomb technician.

“He was the one with the peaceful spirit,” she said. “This is a great loss to all of us.”

“He was always quiet, collected, smart, kind, willing to be there or listen. He was a good friend,” he said.

He said that Justin joined the military in part because his parents are police officers and they instilled in him “a strong sense of duty.”

A picture from Peabody High School showed his participation as a cross-country athlete.

The caption for that picture read, “Finishing strong.” Justin was also a member of the ski club.

“Justin grew up with nine boys around the corner at my house. Out of all my boys, Justin was the quiet child, the peacemaker out of all of them — just humble, a sweet child. I can’t say enough about that young man,” said family friend Renee Drummond-Brown. Drummond-Brown’s son, who was a childhood friend of Schmalstieg’s, also serves in Afghanistan

“My son, Cardell Nino Brown Jr., is in Afghanistan right now, and he’s in the public affairs department. He was given the initials, so he was covering the story, not knowing that this was his childhood friend that grew up right in my home,” said Drummond-Brown.

Justin Schmalstieg was raised in the Stanton Heights neighborhood of east Pittsburgh, Pennsylvania. His childhood friend recalled he used to love playing hockey in Morningside and rollerblading through Highland Park with friends.

As a teenager, Justin graduated from Peabody High School in 2000, where he met Ann, his high school sweet heart and future wife. Justin was on the ski club and ran cross country at Peabody. His classmates gave him an award as one of the school’s top runners.

Shortly after 911, Justin enlisted in the Marine Corps. A friend said Justin joined the military in part because his parents instilled in him “a strong sense of duty.”

Staff Sgt. Schmalstieg’s critical job as an explosives disposal specialist would take him on multiple combat tours over his nine year career, first to Iraq, and then to Afghanistan. He also served his fellow Marines by appearing in training videos, demonstrating how to defuse buried explosives.

His best friend’s mother remembers Justin as unusually quiet and calm even as a child, traits that would have served him well as a bomb technician.

“He was the one with the peaceful spirit,” she said. “This is a great loss to all of us.”

Another childhood friend echoed her characterization.

“He was always quiet, collected, smart, kind, willing to be there or listen. He was a good friend,” he said.

Barry Dunbar went to Arsenal Middle School with Schmalstieg. As kids, he recalled, Schmalstieg loved cartoons and video games, and the two would spend hours playing hockey in Morningside and rollerblading through Highland Park.

When they went to different high schools, they remained close, but eventually lost touch in the early 2000s, he said. They reconnected on Facebook when Dunbar, who joined the Army in 2008 and is stationed at Ft. Hood, Texas, considered enlisting.

“We both thought it was a path we’d never go into because as a kid I was totally into sports, and he was into video games,” Dunbar said. “But he gave me some choice words. He said, ‘You can make a good life out of it and get your life on track.’ ”

Staff Sgt. Justin E. Schmalstieg was on his first tour in Afghanistan. He had enlisted in the Marine Corps in 2001 and served three stints in Iraq, his family said.

“He loved what he was doing,” said John Gilkey, a Pittsburgh police detective and Schmalstieg’s father. “He was a good kid. What can you say? It hasn’t hit us yet.”

Gilkey said the family did not want to discuss the circumstances surrounding his son’s death. He said they learned of Schmalstieg’s death at 11:30 p.m. Tuesday when a Marine knocked on the front door of his Stanton Heights home and delivered the news.

“He loved his job. He loved his job, I’ll tell you that,” Gilkey said, standing on his front porch while family members gathered inside. “He was charismatic. He seemed to get along with everybody.”

In the 2000 Peabody High yearbook, Schmalstieg’s senior portrait appears next to his future wife’s portrait. He also is featured on a page dedicated to the cross country team, in which he was listed as a “top runner” next to a photo showing a lanky Schmalstieg pulling away from two other runners.

His wife could not be reached for comment last night. On her Facebook page, her profile picture shows her and Schmalstieg cheek to cheek, smiling at the camera.

Funeral arrangements are pending. Gilkey said the family is in a “holding pattern” while they wait for the body to be returned to the United States. Before his last deployment, Justin and Ann married in November 2009. The couple moved to Oceanside, California, where Staff Sgt. Schmalstieg was stationed at Camp Pendleton.

In addition to his parents and wife, SSG. Schmalstieg is survived by his 15-year old brother John.

Funeral arrangements have not yet been announced but Pittsburgh police officers are working with Schmalstieg’s parents to plan a special tribute.