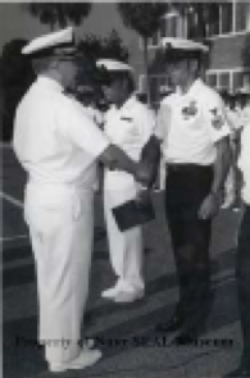 In June 1976, he graduated Basic Underwater Demolition/SEAL training and served with Underwater Demolition Team TWENTY ONE at Naval Amphibious Base, Little Creek from October 1976 to June 1978. He served in Naval Coastal Systems Center Panama City, Florida until August 1981 when he received orders to NAVSCOLEOD, Indian Head Maryland. In February 1983, he returned to Little Creek, Virginia for duty at a classified component of Naval Special Warfare Group TWO again at Little Creek.

On 23 October 1983 as part of Operation URGENT FURY, HT1 Morris and other special warfare operators from a joint special operations task force were tasked to infiltrate the Caribbean island of Grenada by sea in the vicinity of Salinas Airfield and obtain time sensitive intelligence on the conditions of the airfield runway, the enemy’s strength and positions. HT1 Morris was killed in action while conducting the parachute insertion into the sea. His remains were never recovered.