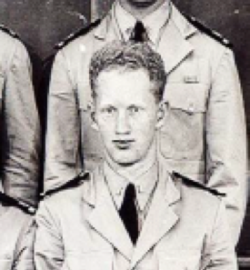 LT(jg) AV(P) George Plummer McNear, III, USNR, graduated from Navy Bomb Disposal Class #25, on 7 July 1943. He remained on staff until December of 1943 and was the officer-in-charge of airborne bombs and fuzes, Unit No. 7.

In December of 1943, he was assigned overseas and subsequently assigned to Commander Aircraft, Seventh Fleet on 3 February 1944. LT(jg) McNear was killed on 28 January 1945 in a airplane crash on Los Negros Island in the Admiralties during the flight test of new operational equipment. LT(jg) McNear was posthumously awarded the Bronze Star Medal.