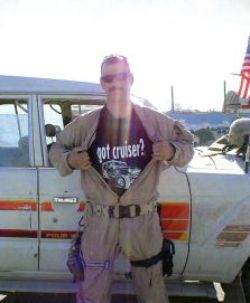 MINNEAPOLIS — Master Sgt. Brett E. Angus was perhaps called to be a Marine. With his father and his uncle both in the military, he grew up surrounded by family members who wanted to serve their country.

He loved to travel and was able to see the world with the Marines. He even met his wife while working in Japan. Angus had been in Iraq for less than a year before he was killed Saturday by an improvised explosive device.

“He expressed no qualms about going. He felt that this was his job,” said his uncle, David Angus. “We were very proud of him. … Our family supported him in his decision.”

Angus, 40, died while conducting combat operations near Camp Taqaddum, Iraq, Department of Defense officials announced Monday. He is the 28th Minnesotan to die as a result of injuries sustained in the Mideast during the Iraq war.

A Marine spokeswoman said no other information was immediately available, but earlier reports said a Marine died when his vehicle struck a roadside bomb.

Angus grew up in St. Paul and joined the Marines after high school, said David Angus. He was a career Marine based at Camp Pendleton, Calif., and lived near there with his wife, his uncle said.

During the war, Angus was connected to the 2nd Marine Aircraft Wing.

“That was his calling in life,” said David Angus, a Vietnam-era veteran. Brett Angus’ father, Russell, was drafted and served in Vietnam, David Angus said.

“The whole family has a sense of duty when it comes to our service in the country and that’s (Brett),” David Angus said.

David Angus said his nephew visited Minnesota before heading to Iraq. He said his nephew wanted to do what was asked of him, even though some family members disagreed with the war.

In addition to traveling, Brett Angus enjoyed driving his Toyota Land Cruiser off road, his uncle said. Garie Chavez, operator of a Web site devoted to Land Cruisers, said Angus had recently contacted him about a part for his vehicle.

Chavez was selling T-shirts in honor of Angus and was taking donations for the family. As of Monday evening, Chavez estimated he had collected about $300 in donations, excluding T-shirt sales.