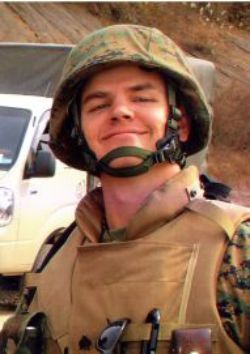 Sgt. John P. Phillips, 29, of St. Stephen, S.C., was on his second tour in Iraq, serving as an explosive ordnance disposal technician with 3rd MLG’s 9th Engineer Support Battalion, when an improvised explosive device struck the vehicle he was riding in near Fallujah.

Phillips suffered severe burns on more than 77 percent of his body, and he succumbed to his wounds after five months of treatment.

He enlisted in the Marine Corps in 1996 and received a military occupational specialty as a motor vehicle operator in 1997. He also served as a Marine security guard at the American Embassy in Cairo, Egypt from 1998-1999.

In January 2001, Phillips left the Marine Corps to pursue a new career, but after the Sept. 11, 2001, terrorist attacks, he reenlisted.

He deployed in support of Operation Iraqi Freedom for the first time in February 2004 as a motor vehicle operator and served there for seven months. In December of that year, Phillips moved into the EOD field.

At the memorial, those who knew him recalled Phillips’ dedication to his job and his Marines, as well as his determination to make any situation calm.

“He regarded his Marines as more important than himself,” said Sgt. Michael Chapman, an EOD technician with 9th ESB. “His leadership and knowledge inspired others, and he is a representative of what all Marines should be.”

“He lived his life with Christ, which is why I know he is in Heaven right now,” Chapman said.

Sgt. Jorge Pereira, an automotive organizational mechanic with 3rd MLG and friend of Phillips’, served with him in Iraq in 2004 when the two were assigned to 2nd Battalion, 7th Marine Regiment, out of Twentynine Palms, Calif.

Pereira described Phillips as an eager and energetic Marine who always wanted to be either a reconnaissance or EOD Marine.

“Before our unit was supposed to come home from Kuwait a couple years ago, he stayed behind for an extra three weeks so he could get himself into the EOD field,” Pereira said. “I told him he was crazy, but that’s what he wanted to do because he really believed in it.”

Lt. Col. Mark Menotti, 9th ESB’s commanding officer, referred to Phillips as an absolute fighter and praised his commitment to the Corps.

“He (lateral) moved to a dangerous field,” Menotti said. “He was a selfless Marine … and he made the move for his country, Marine Corps and family.”

Pereira said Phillips was an adept, proficient Marine who always passed on a wealth of knowledge.

“He was one of the smartest guys I have ever known,” Pereira said. “He taught me a lot when he was in his first (military occupational specialty) field. I remember one time he went to a course at 29 Palms that was aimed at infantry tactics, and he finished first, beating the other grunts. That’s the kind of person he was.”

Days after Phillips’ Marine Corps family mourned him here, his immediate family, loved ones and hundreds of Americans who never even knew him attended his funeral services in South Carolina.

The Post and Courier newspaper of Charleston, S.C., reported that family and friends filled the pews of Russellville Christian Church Aug. 26 while more than 200 Patriot Guard Riders gathered outside to mourn Phillips. Phillips was laid to rest with full military honors at Sunset Memorial Cemetery in nearby St. Stephen.

According to their Web site, the Patriot Guard Riders is a diverse amalgamation of patriots from across America who attend funeral services of fallen American heroes as invited guests and show sincere respect for the fallen, their families and their communities and shield the mourning family and friends from interruptions created by any protestors.

Phillips is survived by his wife, Stephanie Phillips, whom he married in early June in a small bedside ceremony at the hospital in Texas. The Post and Courier reported that, “When he was inured in March, Stephanie Phillips left behind her job as an accountant, her brand new car and the apartment that the couple shared in Niceville, Fla.”

She was with him until the end.