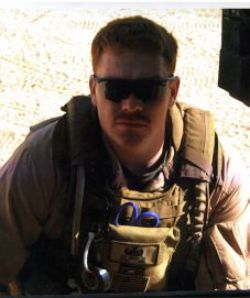 Marine Sgt. Justin Walsh, a 2001 graduate of Cuyahoga Falls High School, has died of injuries suffered in Iraq while defusing a roadside bomb. The 24-year-old, red-haired Marine, serving his third tour in Iraq, was wounded Oct. 4 2006 and died Wednesday at the National Naval Medical Center in Bethesda, Md., his father, Jim Walsh, said.

He was wounded when an improvised explosive device exploded while he was defusing another roadside bomb.

He was treated in Iraq and Germany before being transferred to Maryland, where he died about 3 a.m. Wednesday, said his father, who lives in Mantua in Portage County.

He is also the son of Terri Walsh of North Benton and has a brother, James Walsh II, and sister, Heather Marie Walsh.

Walsh is the fifth serviceman with ties to Cuyahoga Falls to die in Iraq, Robart said.

The loss of so many sons, brothers and fathers of Cuyahoga Falls “takes a toll,” Robart said.

Walsh’s father said his son was proud to be a Marine. “He loved his country” and loved working with explosive ordnance, his father said. The father, a Vietnam era Army veteran who served with the 82nd Airborne, praised the medical team that worked with his son.

“The medical staff did a wonderful job,” he said. “At least he died in this country.”

Walsh was with the 2nd Marine Division and was involved in the invasion of Iraq in 2003.

His brother, James, 26, of Stow, said his brother, in working with an explosive ordnance disposal unit, “felt if he could save some Marines’ lives by doing it, he would do it.”

He said Justin “took his job very seriously, but as far as life went, he enjoyed life. He lived in the moment. He never knew how long he would be here because of the occupation he had.”

He also said his brother “touched so many people’s lives” in his 24 years.

Falls High School Principal Nick Valentine said Walsh’s death hits home “because we send so many kids off to the armed services now, and all of us realize the odds of this happening are getting greater not lesser.”

Walsh’s death, he said, “makes you reflect and understand a little bit better that the impact of the war is on all of us.”

Greg Roth, a social studies teacher at Falls High who was Walsh’s Advanced Placement U.S. History teacher, said Justin had talked about going into the Marines from the time he was a freshman.

He said Walsh had a great sense of humor but a serious side as well. “He seemed to know what was important and what wasn’t,” Roth said. “You’re talking about a fantastic young man — and I would have told you that two months ago, as well.”

He said Walsh, an offensive and defensive lineman, “wasn’t your biggest lineman” but he made up for the lack of size, “with hustle. He always had a tremendous attitude and always had a smile on his face. He was a great kid.”

Ross said as a football coach, “you don’t remember all your players, but he was one of those players that you always remember.”

Brian Yelling, 40, a medical equipment technician from Cuyahoga Falls, had known Walsh for only a year, but said he “had every opportunity to do other things in his life, and he chose to do this. There aren’t many kids who want to be a bomb specialist, especially with the Marines.”

Even as he and his family are preparing for the funeral of his son, Jim Walsh said Americans should not just think of those who have died in the war but remember that thousands are being wounded as well.

“A lot of them don’t have arms or legs,” he said. “We shouldn’t forget those who have been wounded.”

And, he said, Americans must remember that a war is still under way.