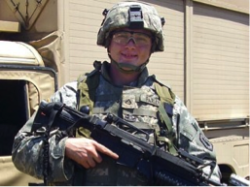 Staff Sgt. Derek John Farley was born in Troy, New York on May 21, 1986 and died in Afghanistan on August 17, 2010. He is survived by his parents Kenneth and Carrie Boyce Farley, his brother Dylan M. Farley and sisters Colleen (Nick) Corrodore, Theresa (Jim) Burl and Julie Farley. Derek leaves behind the love of his life Maria Moebius. Derek is survived by his maternal grandparents Owen and Joyel Defferding Boyce and he was the paternal grandson of the late Paul and Edna Palmer Farley. Also survived by several aunts, uncles, nieces, nephews and cousins. Derek touched the lives of all of his family members, friends and neighbors. Derek is a 2004 Columbia High School graduate and joined the Army right out of high school.

SSG Farley was assigned to the 702nd Ordnance Company (Explosive Ordnance Disposal), 191st Ordnance Battalion, 21st Theater Sustainment Command.  SSG Farley’s team responded to a roadside bomb in Bala Boluk, Farah, Afghanistan.  The improvised explosive device exploded when SSG Farley attempted to render it safe.  SSG Farley had received the Purple Heart for an injury he had received in Iraq in 2007, while attempting to disarm an improvised explosive device.  In the 2007 incident, SSG Farley suffered the loss the hearing in one ear.  SSG Farley was awarded the Bronze Star Medal and the Purple Heart Medal with two oak leaf clusters.