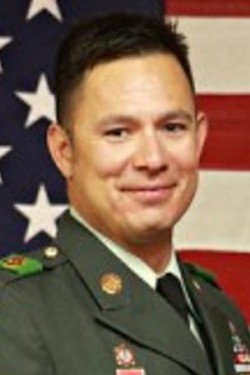 Staff Sergeant Israel P. Nuanes was born on March 10, 1974 in New Mexico. He graduated from Casa Grande Union High School in 1992, after which he enlisted into the Army and became a 63S Heavy Truck Mechanic stationed at Fort Hood, Texas. After a brief break in service, Staff Sergeant Nuanes joined  the Army National Guard and deployed to Iraq. Upon his return, he re-enlisted as Infantry and trained at Fort Benning, Georgia and was later stationed at Fort Bragg, North Carolina. In 2008, Staff Sergeant Nuanes volunteered to become an Explosive Ordnance Disposal (EOD) Technician. He graduated EOD School at Eglin Air Force Base, FL in July 2009. He was then stationed at Fort Drum, New York, where he deployed to Iraq in October 2009. During this deployment, he received many awards and recognition along with a promotion to Staff Sergeant and Team Leader certification. He re-enlisted as an EOD Team Leader for an additional 6 years, and was assigned to 741st Ordnance Co, Fort Bliss, Texas. Israel deployed in March 2012, where he was killed in action due to injuries sustained by an improvised explosive device in Kandahar Province, Afghanistan.