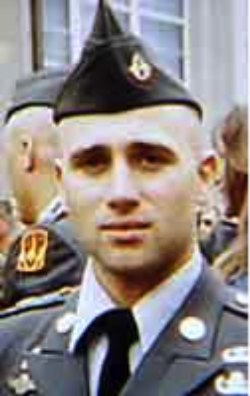 SSG Michael John Sutter was killed on 26 December 2003. SSG Sutter was assigned to the 745th Ordnance Company (Explosive Ordnance Disposal), 79th Ordnance Battalion (Explosive Ordnance Disposal), 111th Ordnance Group (Explosive Ordnance Disposal), Michigan Army National Guard.  SSG Sutter was killed while attempting to render safe an improvised explosive device when it detonated in Baqubah, Iraq. An Iraqi citizen had reported an improvised explosive device. The improved explosive device was off to the side of the road several meters.  The team deployed a robot to investigate. The team saw a gray 130mm projectile with a black box taped on the side. Two wires came from the box to the nose of the projectile.  There was no visible power source. The team disrupted the device and a re-check by the robot showed that the box had been completely separated from the projectile. SSG Sutter approached the device from the opposite side of the road. SSG Sutter knelt down directly across from the device and when his knee touched the ground it detonated. No evidence was found to determine what the trigger actually was. SSG Sutter was posthumously awarded the Bronze Star Medal and the Purple Heart Medal.