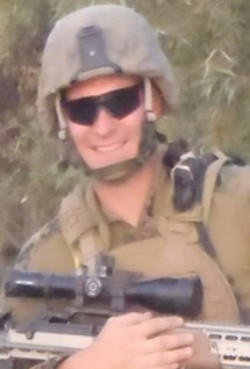 Staff Sergeant Joseph D’Augustine was born on August 21, 1982 and grew up in Englewood, New Jersey. After graduating high school in Waldwick, he graduated Marine Corps Boot Camp at Parris Island in June of 2001. As a basic infantryman, Joe spent several years in the infantry and participated in Operation Iraqi Freedom from 2004 to 2005, 2007 to 2008, and 2009. After his extensive deployments in the infantry, Staff Sergeant D’Augustine lateral moved into the Explosive Ordnance Disposal (EOD) field, attending Naval School Explosive Ordnance Disposal from September of 2010 to June of 2011. Upon graduating, he received orders to EOD Company, 8th Engineer Support Battalion, 2D Marine Logistics Group at Camp Lejeune, North Carolina. Immediately upon checking in to the Company, he was thrust into the Company’s pre-deployment training program in preparation for the upcoming Operation Enduring Freedom 11-2 deployment to Afghanistan. Assigned as an EOD Team Member in October 2011, Staff Sergeant D’Augustine and his EOD Team Leader arrived in Afghanistan and began supporting Kilo Company 3rd Battalion, 7th Marines during combat operations. During his time in Afghanistan, he was directly responsible for the render safe or neutralization of 73 improvised explosive devices and the destruction of over 1,000 pounds of homemade explosives.

Staff Sergeant D’Augustine is survived by his father Anthony, mother Patricia, and his three sisters Michele, Nicole, and Jennifer.