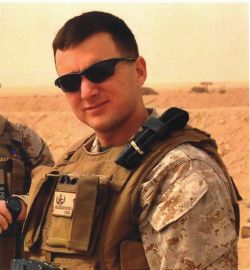 Staff Sgt. Mark A. Wojciechowski of Cincinnati, Ohio was a 2002 graduate of Glen Este High School. For his junior year, Tony “Wojo”;,  as he liked to be known, transferred to the Scarlet Oaks Career Development Campus in Sharonville to be part of its junior ROTC program. Tony was an exceptional student and was offered an apprenticeship, but declined the offer due to his determination to join the Marine Corps; something he wanted to do for many years. Born at Wright Patterson Air Force Base, he was raised in a military household. His step-grandfather served in the Marines and his mother served in the Army.

Tony signed up for basic training the fall after he graduated. Upon completion of boot camp at Paris Island, South Carolina, he received orders to Naval Station Bremerton, WA to serve with the Marine Corps Security Force Command. Upon completion of that tour, he received orders to Marine Corps Base Camp Lejeune, North Carolina where he re-enlisted after having served only three years. Upon re-enlistment, Sgt Wojciechowski executed a lateral move to the 2336 MOS (Explosive Ordinance Disposal) otherwise known as the Bomb Squad. He was then transferred to Elgin Air Force Base, Florida to the EOD school for seven demanding months. Sgt Wojciechowski completed and graduated his school near the top of his class on August 2, 2006. His EOD class started out with 48 students, with only 9 graduates to include him.

He loved the Marines and probably would have made a career out of it. He had just re-upped to serve again. Tony attended the same school that Sgt. Matt Maupin graduated from. Maupin was taken hostage and killed in 2004. Tony died at age 25 while supporting combat operations in Al Anbar province, Iraq. He was killed in Iraq on April 30, 2009 with two others. Tony’s hobbies included the great love of scuba diving, where he hoped to become a Master Diver, snow skiing, working out and staying fit, golfing and billiards.

He was planning a trip to Australia to scuba dive in the Barrier Reef after this tour in Iraq. Tony was brilliant, fun, strong, full of life and a great friend to many at home and across the United States. He is the son of Teresa Dillinger and Mark Wojciechowski. Tony earned the Navy and Marine Corps Commendation Medal, Navy and Marine Corps Achievement Medal, Combat Action Ribbon, Good Conduct Medal (two awards), National Defense Service Medal, Iraq Campaign Medal, Global War on Terrorism Service Medal and Sea Service Deployment Ribbon (two awards).