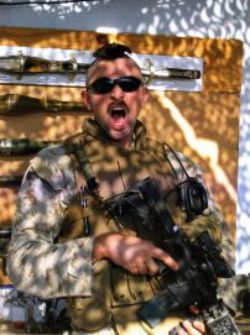 Staff Sgt. William J. Callahan of South Easton, Massachusetts grew up in Hanson where he enjoyed playing basketball, riding dirt bikes and most anything outdoors. He graduated from Whitman-Hanson Regional High School in 1997 joined the Marine Corps soon after, training in explosives disposal. He was awarded EOD Tech of the Year in 2006. As a Marine, he volunteered for Toys For Tots in the South Shore area. He enjoyed Harley Davidson Motorcycles and maintaining his yard and puttering around his house. His last deployment to Iraq was early in 2007. His Awards and Decorations include, the Navy and Marine Corps Commendation Medal with Combat Distinguishing Device, Navy and Marine Corps Achievement Medal, Combat Action Ribbon, Selected Marine Corps Reserve Medal, National Defense Service Medal, Armed Forces Reserve Medal, Iraq Campaign Medal, Global War on Terrorism Expeditionary Medal, Global War on Terrorism Service Medal, Sea Service Deployment Ribbon. He recieved the Purple Heart posthumously. He died while conducting combat operations Iraq On April 28, 2007 at age 28. He leaves his wife, Amy, a son Daniel, his parents, Joseph F. Callahan III and Mary Ellen Toomey Callahan, a sister, Marissa.

EASTON, Mass. — The Marine from Easton killed in Iraq was a new father who was remembered by his relatives as a hero who loved the outdoors, his country and his family.

“Bill was a hero to all of us and I feel fortunate and blessed to have spent the last 10 years of my life with him,” his widow, Amy Callahan, wrote in a brief statement issued May 1.

Callahan’s father, Joseph Callahan III, told The Enterprise of Brockton that Amy gave birth to a son three weeks ago.

“His wife meant the world to him,” he said.

Callahan joined the Marine Corps in 2002 and was assigned to the company in 2005 after being trained in explosives disposal.

The Marine Corps Engineer Association named him the Marine Explosive Ordnance Disposal Technician of the Year. He earned the citation for disarming an improvised explosive device in November 2005 while another bomb exploded under his vehicle and killed two Marines. He helped save others injured in the blast, then returned to investigate the bombs used in the attack while still being fired at.

“He re-enlisted because he and the people he was with believed in our country,” his father said. “They believed it was worth standing up for.”

But his grandmother remembered him as a boy who grew up playing basketball, riding dirt bikes and enjoying the outdoors.