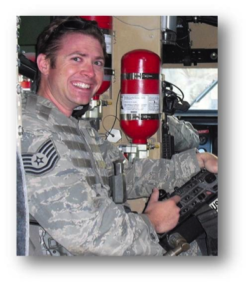 TSgt Adam Ginett joined the Air Force in 1999 and graduated from NAVSCOLEOD in 2000. He was assigned to the 31st Civil Engineer Squadron at Aviano Air Base, Italy. He was on his fourth deployment, serving with the 755 Bravo EOD Flight at Kandahar Air Base, Afghanistan. He died from wounds from a targeted IED while conducting a dismounted patrol with an Army Unit.

TSgt Ginett is survived by his mother and step-father Christina & Jim Kazakavage, his sister Sarah, and his father Allyn Ginett.