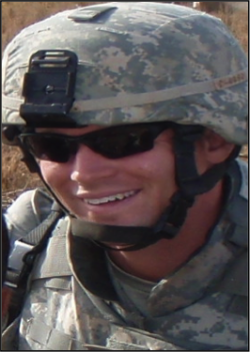 He deployed to the 332nd Expeditionary Civil Engineer Squadron, Balad AB, Iraq. He volunteered for the assignment, his fourth deployment since 2001. During his 107th combat mission, TSgt Capra, who was an EOD team leader was conducting post-blast analysis of a roadside bomb crater. During his investigation, he discovered a second improvised explosive device only a few meters away; while attempting to render the second device safe, it detonated.

TSgt Capra was posthumously awarded a Bronze Star, first Oak Leaf Cluster, for his heroic actions during his deployment. According to the medal citation, during his deployment, which began Nov. 10, Sergeant Capra’s actions ensured the safety and freedom of movement for more than 41,000 coalition forces, multi-national contractors and local nationals. He contributed to the recovery and destruction of more than 24,000 pieces of ordnance weighing more than 26,000 pounds.

He is survived by his wife Angie, and their five children, Victoria, Adrianna, Shawn, Mark, and Jared; his parents Anthony and Sharon Capra, and his eleven younger siblings.