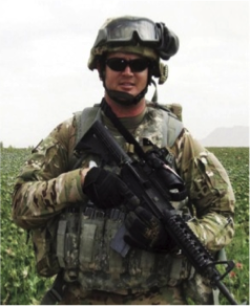 Technical Sergeant Kristoffer M. Solesbee was born on October 2, 1978 in Brindisi, Italy. He graduated from Freedom Christian School in Citrus Heights, California in 1996. He enlisted in the Air Force as an Explosive Ordnance Disposal (EOD) Apprentice and successfully completed basic training at Lackland Air Force Base, Texas in 1999. From there, he attended and graduated from Naval School Explosive Ordnance Disposal at Eglin Air Force Base, Florida in July 2000. His first duty station was to the EOD Flight at Malmstrom Air Force Base, Great Falls, Montana. From there he went to Osan Air Base, Republic of Korea, then to Incirlik Air Base, Turkey. After Turkey he transferred to Hill Air Force Base, Utah. Technical Sergeant Solesbee deployed three times, twice in support of Operation Iraqi Freedom and once in support of Operation Enduring Freedom. While operating in the Kandahar Province, he led his Air Force team in clearing lines of communication, enabling freedom of maneuver, and ensuring the safety of coalition and local nationals by engaging and defeating the enemy’s weapon of choice: the Improvised Explosive Device.